The Government used an old-fashioned procedure to block an amendment to the Agricultural Bill when it came before MPs today amid warnings over chlorinated chicken or hormone-treated beef entering the UK market from the US.

The amendment would give new, stronger powers to an independent, permanent, Trade and Agriculture Commission to scrutinise any accords before they are signed and reject those which are not up to scratch.

But ministers argue that such a move would impose an extra cost on the taxpayer, which would make it something called a Money Resolution. 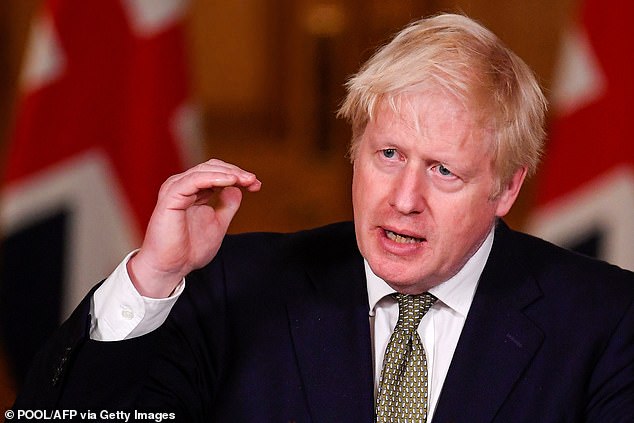 These cannot be introduced by the upper chamber.

Several Conservative MPs insisted they are willing to back the amendment as the Bill returned before the Commons for further debate.

The Government argues that existing protections are already in place and they have no intention of watering them down.

Speaking as Lords amendments to the Bill were considered, senior Tory Neil Parish said the legislation is heading in the right direction but the UK should be a ‘great beacon’ on animal welfare and the environment when negotiating future trade deals.

The chairman of the Environment, Food and Rural Affairs Select Committee said: ‘We have in our manifesto the commitment to both animal welfare and the environment.

‘Would it not be right for the Secretary of State for International Trade to have the armour of having the backing of Parliament to say “I can’t negotiate away that particular part of the deal with you because it is written down in law”?’ 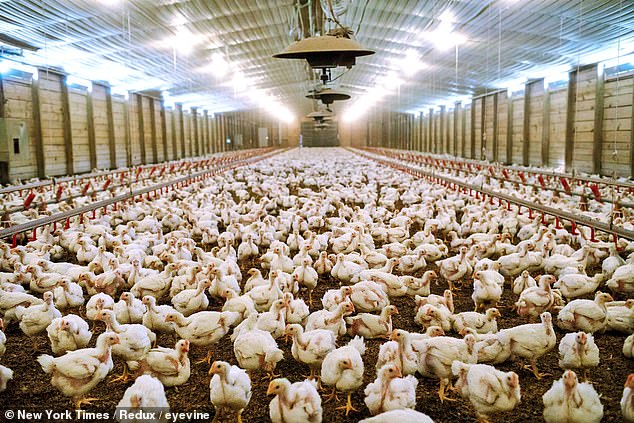 The Government used an old-fashioned procedure to block an amendment to the Agricultural Bill when it came before MPs today amid warnings over chlorinated chicken or hormone-treated beef entering the UK market from the US (pictured, broiler chickens at a commercial poultry farm near Taylorsville, Mississippi)

‘The place to put it is in this Parliament and I will very much support this and (Mr Fuller) does and many on our side do because we want to negotiate very good trade deals – not only with Australia, New Zealand and America but later on, this is not about today or tomorrow, this is about several years down the road.’

Mr Parish criticised Brazilian farming techniques which ‘destroy the land’, adding: ‘We, the British, believe in animal welfare, we believe in the environment… so does this Government, but for goodness sake getting the backing of Parliament.’

Conservative MP Julian Sturdy said he would back the Lords amendment on food standards, telling the Commons: ‘I will vote today to write concrete legal protections into this Bill. 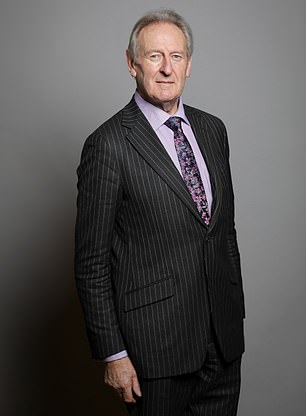 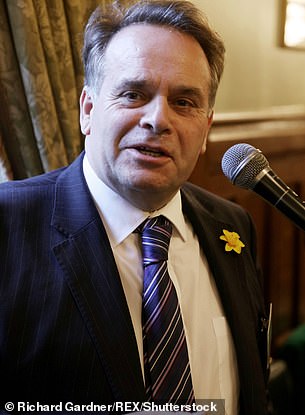 Crossbench peer Lord Curry of Kirkharle (left), who put forward the amendment and saw it approved in the Lords, told the Independent the extra cost would have been ‘minuscule’. The move was also attacked by Neil Parish (right), the Tory chairman of the Commons environment committee, who said: ‘The government should allow a vote’

‘I hope a continued stand on this issue will encourage the Government to put our manifesto commitment to maintain UK standards on to the statute book.’

Conservative former minister Steve Brine also said of the amendment: ‘Isn’t the wider point that we’d be sending the message out that we want the rest of the world to change their practices – it’s not just about what we do domestically, it’s about Britain being a beacon for the right thing elsewhere in the world.’

Crossbench peer Lord Curry of Kirkharle, who put forward the amendment and saw it approved in the Lords, earlier told the Independent the extra cost would have been ‘minuscule’.

‘It’s unbelievable and a huge mistake by the government,’ he said.

‘I can’t think of an issue in recent times which has so much public support. For the government not to recognise that, by not allowing my amendment, is really disappointing.’

Labour and the SNP also outlined their support for the amendment, which the Government wants to disagree with.

She also said: ‘The tools we have to ensure high standards are, as I’ve tried to set out, are many and varied and strong enough to protect standards even under pressure.

‘We have existing regulation under retained EU law which is watched very carefully and controlled by the FSA. Parliament can scrutinise new trade deals, as indeed the Select Committee for International Trade is about to do for the Japan deal.

‘Other experts including those within the Trade and Agriculture Commission can advise us on trade policy and finally, but by no means least, we have the buying power of the British consumer who is increasingly committed to high standards of animal welfare.

‘We will be carrying out a serious examination of the role of labelling in promoting high standards and high welfare across the UK market which we will start to consult on before the end of this year. I think this combination of measures will protect producers of high welfare British food, while allowing us to import where we wish to.’

Ahead of the debate, a tractor demonstration took place in central London as farmers demanded food standards are upheld in post-Brexit trade deals.