Boy, 4, left soaked in blood after mother’s throat slit by intruders in KZN

Caroline Chennai Mubvakure was killed in her home in front of her son.

Caroline Chennai Mubvakure (39) was killed in front of her four-year-old son when unknown men slit her throat and stabbed her multiple times in her Chasedene, Pietermaritzburg, home on Saturday afternoon.

The killers only took her cellphone and the WiFi router, which has left her loved ones wondering about the motive for her murder as there were other valuables in the house.

Her husband, Chino Mutambaziko (54) had taken her car to a mechanic and was going to stop at the grocery shop on his way back. When he returned to the house just after 15:00 his son, who was covered in his mother’s blood, ran to him and broke the news of her death.

“I put down the groceries and ran to the kitchen. She was lying in a pool of blood and her skirt was up to her waist so I pulled it down and called friends for help,” he said.

He said her body was still warm so he thought they might still be able to save her but she was already gone.

I think my son tried to wake her up when the killers left and that’s how he got the blood on his clothes because he wasn’t harmed except for a small bump on his chin, but he hasn’t told us how it came about.

Mutambaziko said they had not been able to find any witnesses but hoped that someone might have seen something that could help with the investigation. He said he could not understand why someone would take a life for a cellphone and a router.

“I don’t think they were trying to rob, I believe they just wanted to kill but I don’t know what the motive was,” he said.

Mutambaziko and his family have lived on the property for more than nine years and had never even had a break in. “Here we are like a family with the landlord because he doesn’t treat us like tenants.

“We look out for each other and when he’s going out of the country he leaves me with his keys and trusts me to even take care of his children and I’m the same with him.” 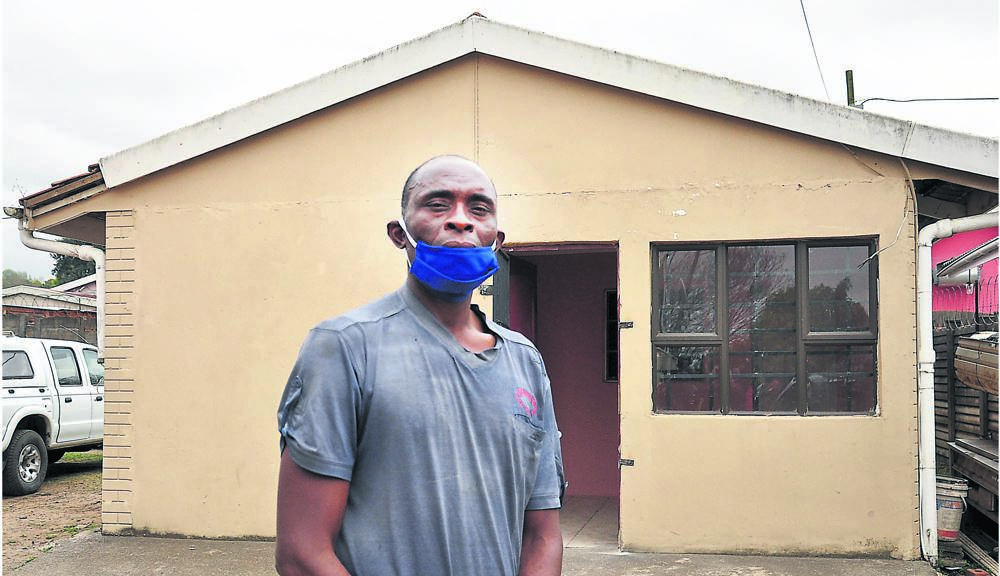 Chino Mutambaziko in front of the house where his wife Caroline Chennai Mubvakure was killed.

The relatives and friends who gathered at the house yesterday said it also did not make sense how someone knew that she was home as she lived in an outside building at the back of the property.

“They jumped over the gate and there was blood at the top but I’m not sure whether one of them got injured or it was my wife’s blood that was on their clothes,” said Mutambaziko.

He described his wife as a loving and kind person who got along with everyone she met.

The couple arrived in South Africa from Zimbabwe in the early 2000s.

“I’m going to miss her terribly and I pray that God gives me strength to raise our son the way she would have wanted him to grow up.

“I’m not going to take him home [Zimbabwe], he has to live with me so that I can try and love him enough for both of us.”

The last adult to see Mubvakure alive was Michelle Majojo, who is the childminder who looks after the four-year-old. She said Mubvakure and the son walked her to the gate at the end of her shift and she did not see anyone suspicious lurking around the neighbourhood as she made her way home.

She said, breaking into tears:

I’m in so much pain … She was like a mother to me. Both her and her son loved me so I’m going to be there for him — that’s the best way I can honour her memory.

Mutambaziko said Mubvakure had wanted to be buried in their home in Zimbabwe but he did not know whether they would be allowed to go due to the Covid-19 restrictions on cross border travel.

“The last time someone died from our church, the immigration officers only allowed the body through the border, even his wife was not allowed to go. My problem is that there’s only my mother back home and she’s 83 years old. I can’t expect her to be running around making preparations for the funeral.”

Asked what he would do if he was not allowed to go, he shrugged his shoulders and said, “My wife can’t be buried without me there.”

Mubvakure was a cleaner in the offices of a Pietermaritzburg law firm and Mutambaziko runs a plumbing business.

One dead, many injured, as masquerade groups clash in Edo