Information reaching the POLITICS NIGERIA news desk on Saturday afternoon reveals that a National Youth Service Corps member has been arrested by the police over Election Malpractice.

The Corps member who was working as an ad hoc staff of the Independent National Electoral Commission, INEC, was picked up by Police officers at Ward 4, PU 07, Ekpoma (Esan west LGA). 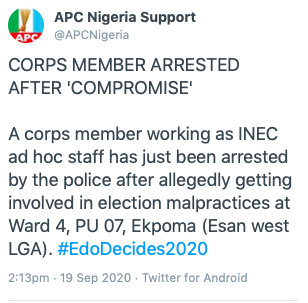 Voting has resumed at the polling unit. Meanwhile, the candidate of the Peoples Democratic Party, PDP, and incumbent governor, Godwin Obaseki has condemned the electoral exercise, expressing disappointment in INEC.

Obaseki, who spoke to the press shortly after voting, disclosed that there were a lot of complaints about faulty card-readers. He however expressed hope that he will emerge victorious.

FIFA Club World Cup 2020 – News – Lee: My European experience would be a weapon against Bayern