Jegede was scheduled to make a stop at Ifon as part of his local government campaign tour.

The suspected political thugs were inside a Toyota Sienna bus branded with Jegede’s campaign pictures.

Chairman of Jegede campaign organisation, Gbenga Akinmoyo, in a statement, said the general public has been made aware of plans by the ruling All Progressives Congress(APC) to adorn political thugs in PDP branded materials to unleash mayhem on gatherings of other parties with the view of putting the blame on the PDP.

Akinmoyo stated that an APC chieftain boasted of militancy, arms and ammunition.

According to the statement: “The information of the arrest of some hoodlums in branded vehicles wearing PDP logo at Ifon in Ose LG, whilst our campaign train is due to make a stop in the town is nothing but an attempt by the APC to make good its evil plans.

“While appreciating the security agencies for their vigilance in averting a needless mayhem, we urge the general public to remain focused and not fall for the antics of the ruling APC who are determined to draw us into unproductive arguments that can distract us from those issues that border on the welfare of our people and failure of the APC government in addressing them.”

But spokesman for the Akeredolu Campaign Organisation, Olatunde Richard, said they were shocked and bewildered by what he termed show of shame by the major opposition party in the state caught napping in a web of violence and thuggery. 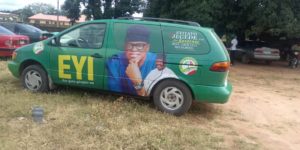 Olatunde said it was a relief for the police to seize the sophisticated guns, live cartridges and machetes which could have been used to cut innocent people of the state short on the altar of politics.

According to him: “While we commend the Police authority for its gallantry efforts at arresting these hoodlums, we condemn this act in strong terms and call for more investigation into the PDP Campaign activities.

“We wonder if the PDP sees the election as a war or an electoral contest for the seat of the State Governor.

“We insist that this does not only constitute danger to our democracy and credible electoral process, but the lives of people, that the party claims it is out to serve.”