Britain’s first widespread frosts of autumn are expected from this weekend with more sub-zero temperatures on the way as bookmakers cut the odds on this month being the coldest October on record.

Eastern parts of the UK faced rain showers today while Scotland will see winds of up to 50mph – and this week will bring maximum temperatures of only 14C (57F) for most of England along with grey skies.

The Met Office said the mercury is then expected to be ‘rather on the cold side in most areas’ for a ten-day period from the end of this week, with overnight frosts and patchy mist and fog likely particularly in the North West. 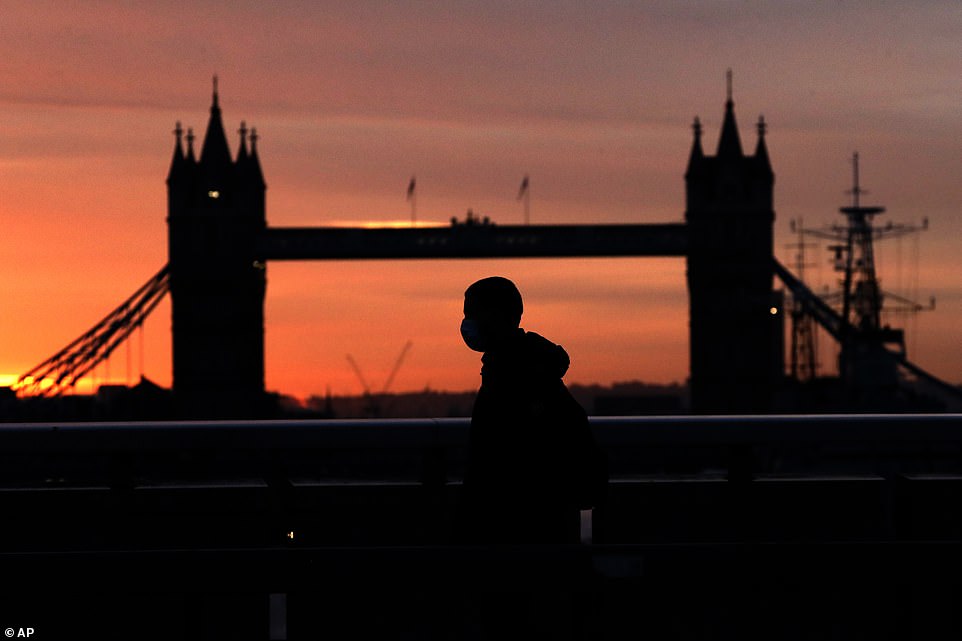 A person wearing a face mask walks across London Bridge, with Tower Bridge in the background, at sunrise in London today 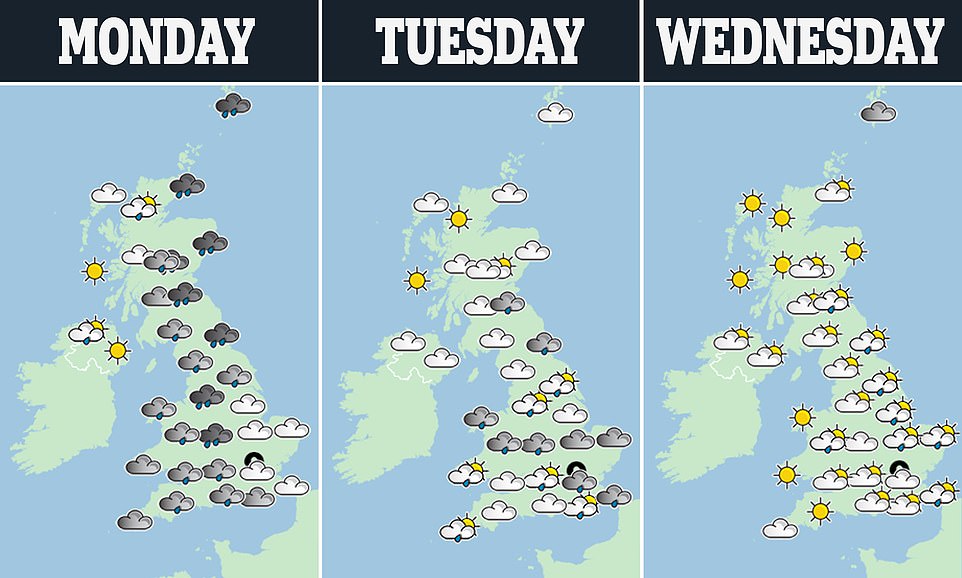 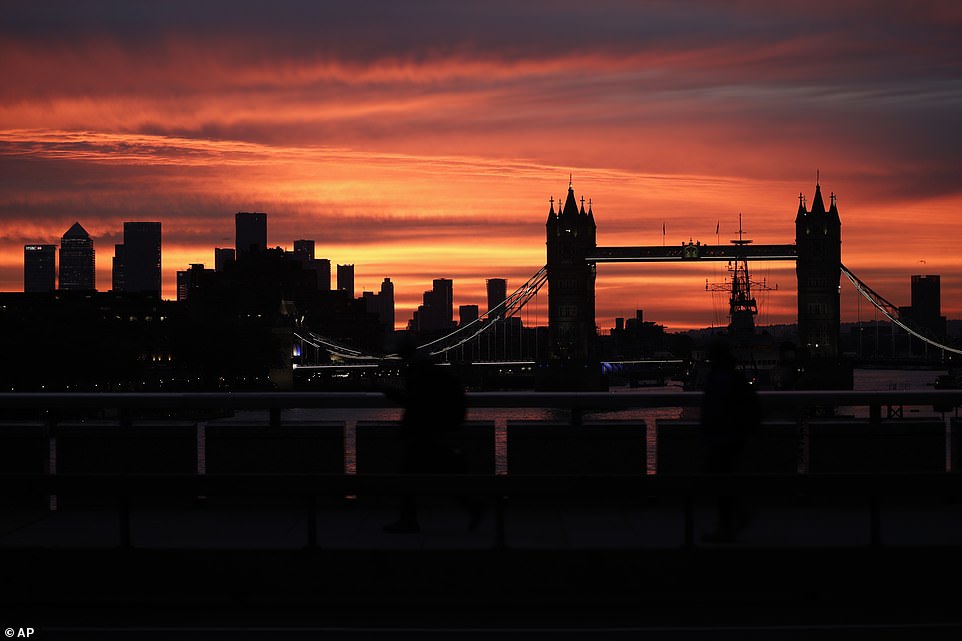 During the first 11 days of October, there have already been four days when the temperature has dropped below zero, with the coldest so far being October 2 when the mercury at Shap in Cumbria fell to -2.4C (27.7F).

More sub-zero days are on the way later this month, although there will have to be a significant fall to exceed last year’s October minimum temperature of -6.2C (20.1F) at Altnaharra in the Highlands on October 31. 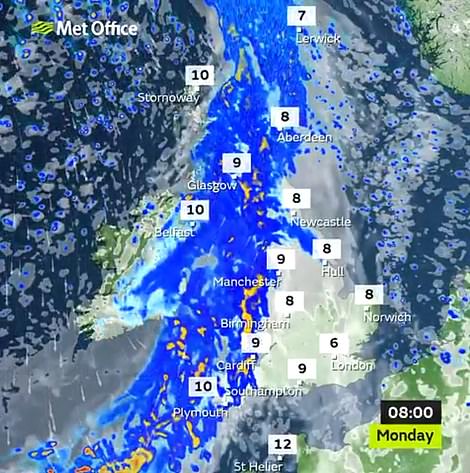 Bookmakers Coral have now cut the odds on this month beating that record from 6-4 to 4-5, and make it 1-2 for snow to fall UK this month, while it is now 4-9 for this winter to be the coldest since records began.

A spokesman for the company said: ‘Winter is set to arrive early this year and with temperatures falling fast over the next few days, the odds have been slashed on this month ending as the coldest October on record.’

Much of the UK is due to be overcast today with rain pushing eastwards, although this is not expected to hit the South East until the evening – with downpours most likely to be in the form of showers or drizzle.

There will be brighter skies in Scotland and northern England once the rain clears away by the late afternoon although there may be some blustery showers, with winds of around 50mph in the Outer Hebrides.

Later on into tonight the weather will be cloudy and damp in southern and eastern England with some light rain, while elsewhere there will be drizzle that will make its way into the west, especially in Wales. 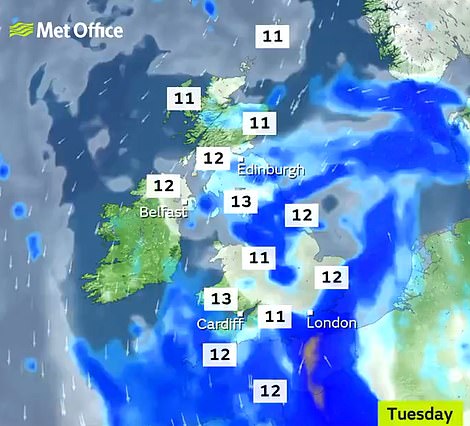 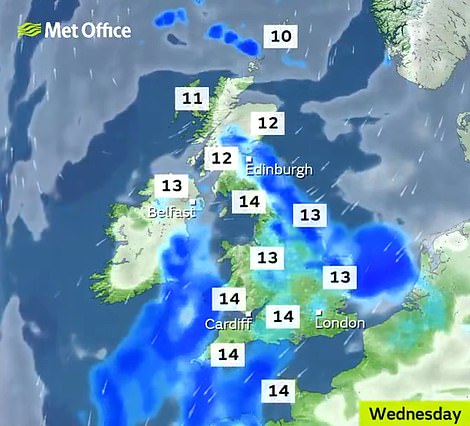 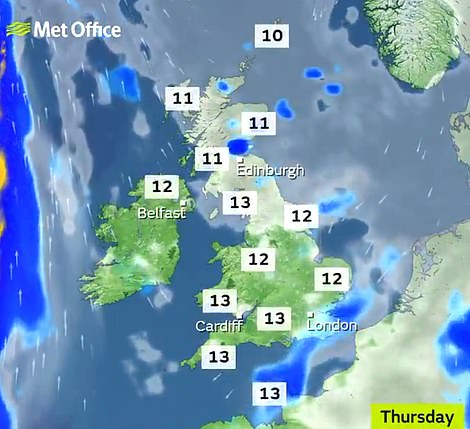 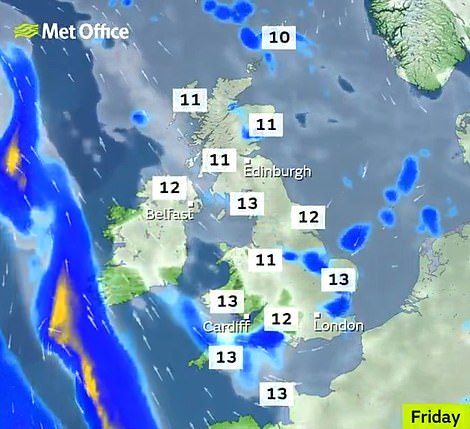 The day will be drier across Scotland and Northern Ireland tomorrow, while showery outbreaks of rain are expected across much of England and Wales with some heavier bursts in northern England also on the way.

Wednesday will be more widely dry and bright but with a risk of a few showers, over the South East. On Thursday, it should be a mainly dry day but with early some mist and fog in the west and drizzle again in the South East.

Looking ahead to this Friday until October 25, the Met Office said it will be turning generally more settled in the North and North West by the end of this week and lasting into next weekend, with dry and bright spells likely.

It will be cloudier and breezier in the East and South East with more showery conditions, with the theme likely to remain largely similar into the start of next week, with the most settled conditions across the far north of the UK.