Former Department of Homeland Security chief of staff Miles Taylor has been blasted as a ‘two-faced liar’ after he revealed himself to be the anonymous author of a controversial 2018 New York Times op-ed – just weeks after denying he was responsible for the bombshell anti-Trump piece.

The article, published in September 2018, chronicled a resistance movement to the president within his own administration and described Trump as, ‘impetuous, adversarial, petty and ineffective.’

The identity of ‘Anonymous’ consumed the president and his aides for some time and became one of Washington’s favorite guessing games.

Taylor revealed himself as the culprit on Twitter Wednesday afternoon ahead of an interview with CNN‘s Jake Tapper.

However, just weeks earlier in August, Taylor denied being the unnamed author when asked during an interview on the network with Anderson Cooper.

‘No I’m not [Anonymous] … I’ve got my own thoughts on who that might be,’ Taylor said. ‘I wear a mask for two things: Halloween and pandemics. So no.’

The emphatic refutation has since come back to haunt Taylor, with members of the White House branding him a ‘liar’ and saying the claims he made in the bombshell article are therefore not reliable.

Leading the charge of outrage was White House Press Secretary Kayleigh McEnany, who tweeted: ‘PROOF: Miles Taylor, who now admits to being “Anonymous”, once told us he was NOT Anonymous. He LIED!

‘This is everything people hate about Washington,’ she continued, ‘two-face liars who push their own agendas at the expense of the People. This is the epitome of swamp!’ 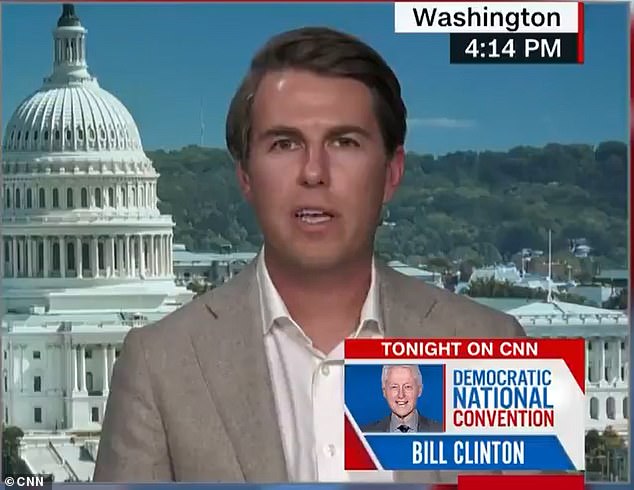 Just weeks earlier in August, Taylor denied being the unnamed author when asked during an interview with Anderson Cooper. ‘No I’m not [Anonymous] … I’ve got my own thoughts on who that might be,’ Taylor responded. ‘I wear a mask for two things: Halloween and pandemics. So no.’ 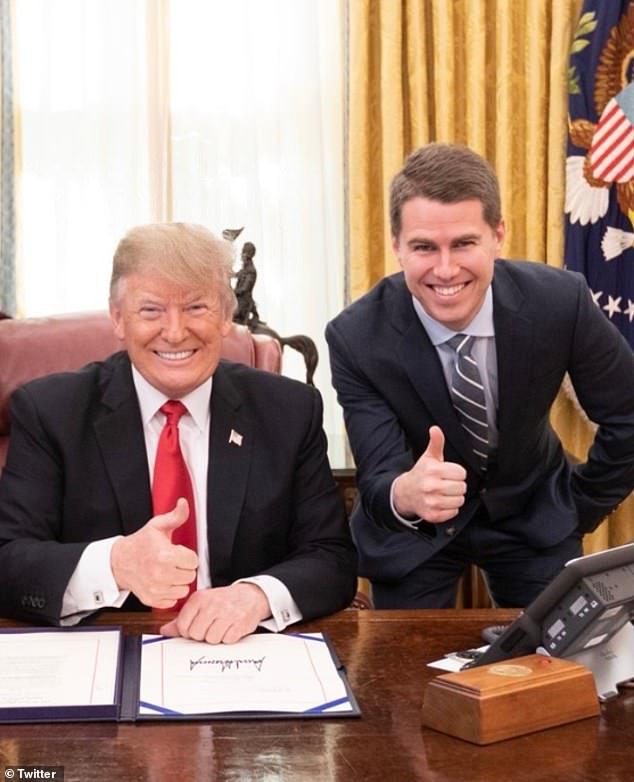 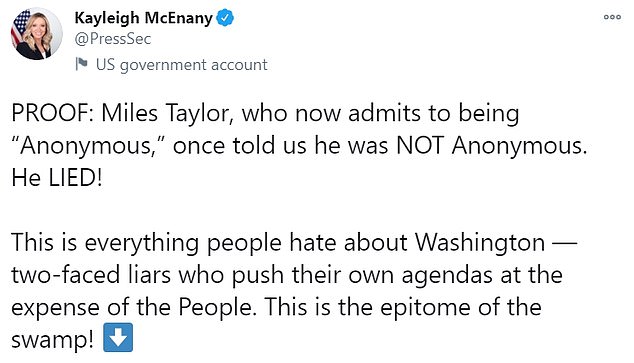 Taylor was described as a ‘senior administration official’ by The New York Times in the September 2018 piece. While serving in the Department of Homeland Security (DHS), he helped carry out the administration’s child separation policy at the border but was not listed on the department’s leadership page at the time.

Both Taylor’s billing as a senior administration official and his involvement in the implementation of Trump’s controversial border separation policy became additional points of ridicule throughout Wednesday afternoon.

‘You have got to be kidding me. Miles Taylor? That’s who the New York Times granted an anonymous editorial article?,’ White House Chief of Staff Mark Meadows wrote. ‘I’ve seen more exciting reveals in Scooby-Doo episodes. What a monumental embarrassment.’

Communication Director for Trump’s 2020 re-election campaign, Tim Murtaugh, added: ‘The New York Times has some explaining to do, getting away with ever calling Mile Taylor a ‘senior’ administration official.’

Several senior Trump figures were named as the possible author at the time, including Vice President Mike Pence and then-counselor to the president Kellyanne Conway.

‘Oh I guess it is true? HA HA HA HA HA HA HA HA. That is so bleeping BEAUTIFUL I can’t possibly be more thankful. I love this so much. The person that the NYT strongly insinuated was, like, the VP or WH Chief of Staff, or Cabinet Member was literally “Miles Taylor.” HA HA HA,’ Fox News contributor Mollie Hemingway wrote.

‘If you’re wondering who Miles Taylor is, I got you,’ wrote Buzzfeed Editor Brandon Hardin. ‘He helped sell Trump’s family separation policy’.

‘Miles Taylor helped spin the Trump administration’s policy of separating migrant children from their parents. How many of those parents were offered media contributorships?’ he said. 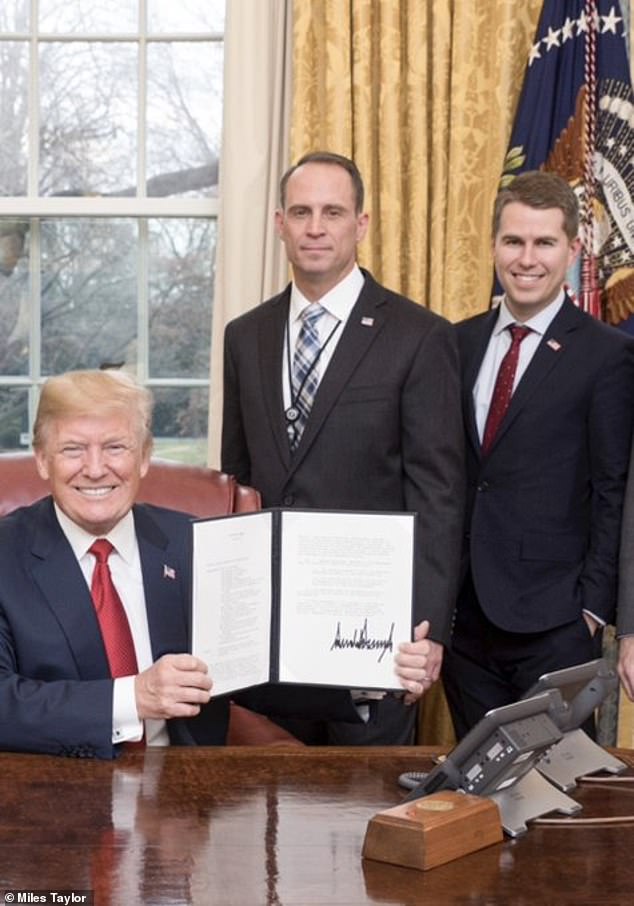 Taylor was described as a ‘senior administration official’ by The New York Times in the September 2018 piece. While serving in the Department of Homeland Security (DHS), he helped carry out the administration’s child separation policy at the border but was not listed on the department’s leadership page at the time 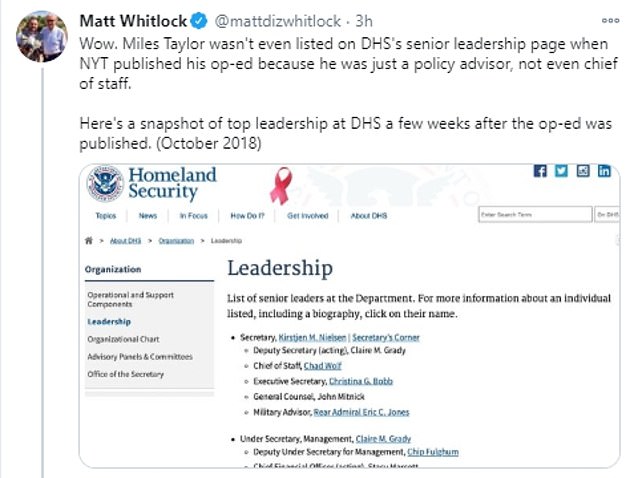 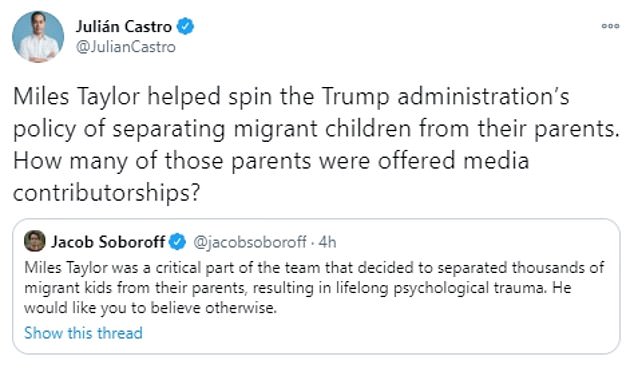 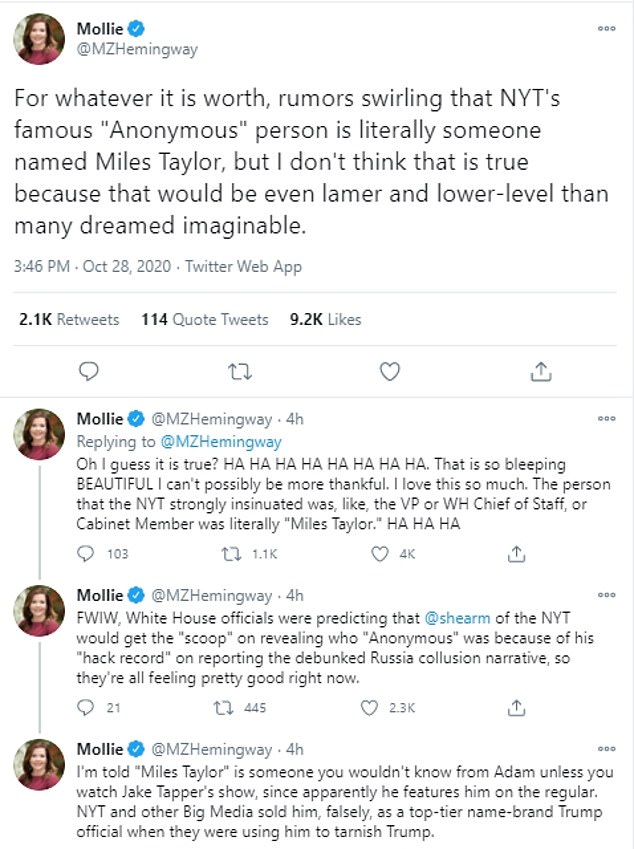 President Trump, meanwhile, claimed not to know Taylor. He then later demanded that Taylor be prosecuted anyway.

‘Who is Miles Taylor? Said he was “anonymous”, but I don’t know him – never even heard of him,’ Trump tweeted Wednesday between campaign stops in Arizona on Wednesday. ‘Just another @nytimes SCAM – he worked in conjunction with them. Also worked for Big Tech’s @Google. Now works for Fake News @CNN. They should fire, shame, and punish everybody associated with this FRAUD on the American people!’

At a rally in Goodyear, AZ, Trump devoted a section to attacking Taylor saying he should be ‘prosecuted’ and joking that he worried that Anonymous might be Hope Hicks or Jared Kushner.

‘Turned out to be a low-level staffer, a sleazebag who’s never worked in the White House,’ he said.

‘Anonymous was a nobody, a disgruntled employee who was quickly removed from his job a long time ago for they tell me incompetence.

‘You know where he works now he works at CNN – can you believe it?’ he said, to boos from the crowd.

‘I have no idea who he is other than I got to see him a little while ago on television. The whole thing was just one more giant hoax from the Washington swamp

Taylor, in a lengthy statement posted to Medium, said he wrote his op-ed and book anonymously because ‘issuing my critiques without attribution forced the President to answer them directly on their merits or not at all, rather than creating distractions through petty insults and name-calling. I wanted the attention to be on the arguments themselves.’

Taylor, who has endorsed Joe Biden, said Trump did not deserve a second term.

‘He doesn’t deserve a second term in office, and we don’t deserve to live through it,’ he said.

He denied being motivated for money, writing that ‘I declined a hefty monetary advance and pledged to donate the bulk of the proceeds.’ 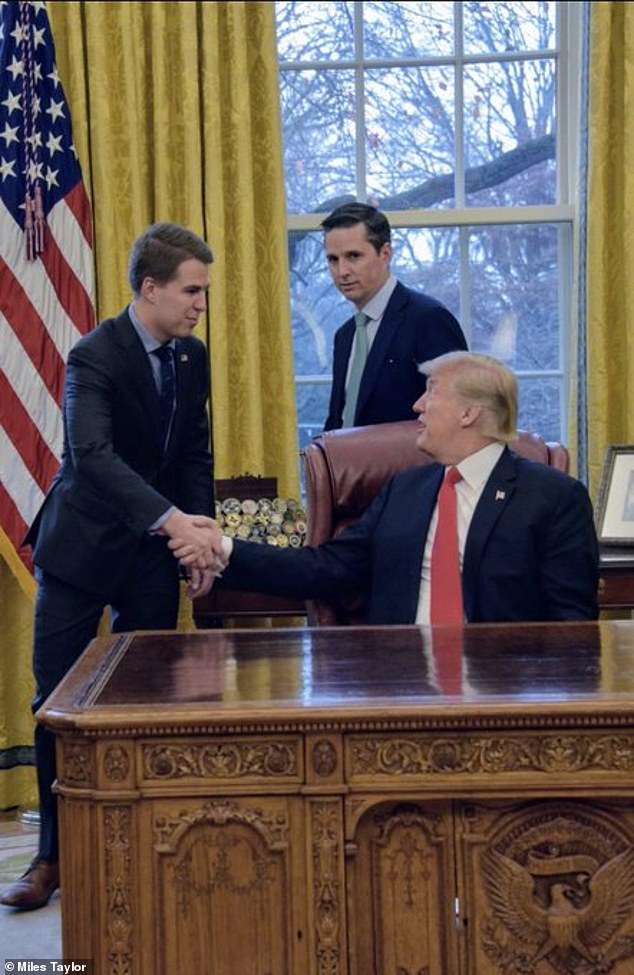 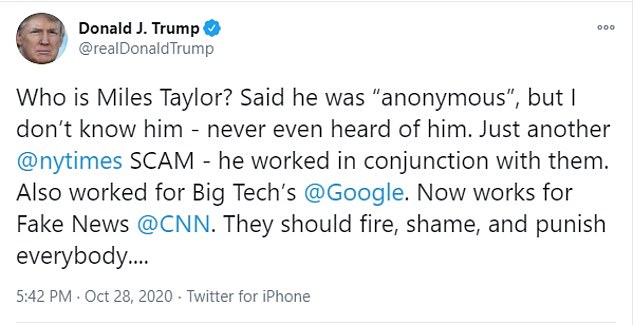 After Miles Taylor revealed himself, President Trump said ‘I don’t know him’

Taylor was one of a group of Republicans who endorsed Biden this summer ahead of the Democratic National Convention.

He went public with his criticism of Trump in August. Near that same time, ‘Anonymous’ also endorsed Biden.

Trump officials continued to pile on Taylor throughout Wednesday.

‘This is the least impressive, lamest political ‘reveal’ of all time,’ said Hogan Gidley, the former deputy White House press secretary who’s now a spokesperson for the campaign.

‘I worked with DHS officials while I was in the White House, and even I had to research who Miles Taylor was. He’s just another standard-issue arrogant, Washington, DC swamp bro who loved President Trump until he figured out he could try to make money by attacking him,’ he added.

‘Among the long list of colossal embarrassments, and there are many, the best is Miles Taylor writing an op-ed trashing the administration he took a paycheck from… and then lying to CNN, the network he now works for, when asked about it on air. What a little circus clown,’ he wrote on Twitter.

Trump weighed in on Taylor in August when the former DHS staffer endorsed Biden and slammed the president in his ensuing media tour.

He called Taylor a ‘DISGRUNTLED EMPLOYEE’ who I ‘do not know (never heard of him),’ and went on to complain that the media is embracing Taylor with ‘open arms.’

‘Said to be a real ‘stiff,” Trump also offered. ‘They will take anyone against us!’ he railed.

In response, Taylor produced a picture of him alongside Trump in the Oval Office, where they’re both giving the camera a thumbs up.

He served at DHS between 2017 and 2019 and said he ‘witnessed the damning results firsthand’ of Trump’s ‘personal deficiencies.’  He served as chief of staff for then-DHS secretary Kirstjen Nielsen, which would have put him in meetings with White House officials on matters of immigration and national security.

When he published the New York Times op-ed, he was a deputy to agency’s then chief of staff.

In an online introduction to the 2017 New York Times piece, which became an immediate controversy, the Times said the author’s ‘identity is known to us’ and the person’s ‘job would be jeopardized by its disclosure. We believe publishing this essay anonymously is the only way to deliver an important perspective to our readers.’

Several Trump figures were named as the possible author, including Vice President Mike Pence and then-counselor to the president Kellyanne Conway.

The identity of ‘anonymous’ consumed the president and his aides for some time and became one of Washington’s favorite guessing games.

The New York Times op-ed describes a ‘quiet resistance’ that wasn’t designed to bring Trump down – only to curb his worst impulses.

The op-ed lost its impact over the years as a number of high-profile former Trump staffers bashed the president publicly, including former National Security Adviser John Bolton and former Defense Secretary Jim Mattis.