At least three people have been killed – two of them beheaded – and several others stabbed in a terrorist knife attack at a cathedral in Nice.

The attack began around 9am just as Mass at the Notre Dame basilica – the largest Roman Catholic church in Nice – was getting underway.

Police quickly swarmed the area, where they shot and arrested the attacker, who has been taken to hospital. A police source said it appears he was acting alone.

The city’s mayor, Christian Estrosi, tweeted: ‘I am on site with the [police] who arrested the perpetrator of the attack.

‘I confirm that everything suggests a terrorist attack in the Basilica of Notre-Dame de Nice.’ 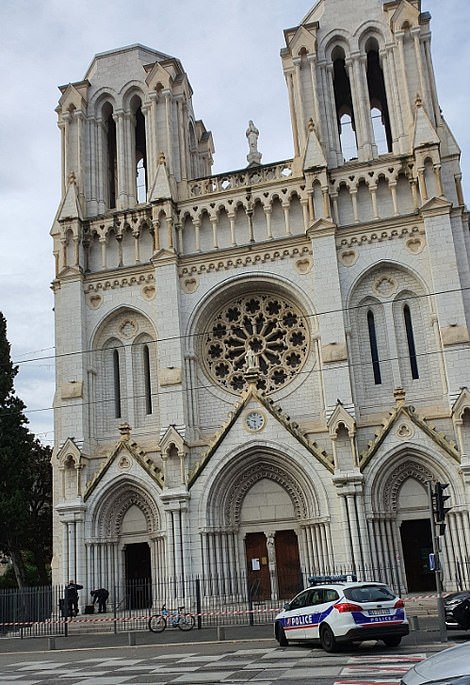 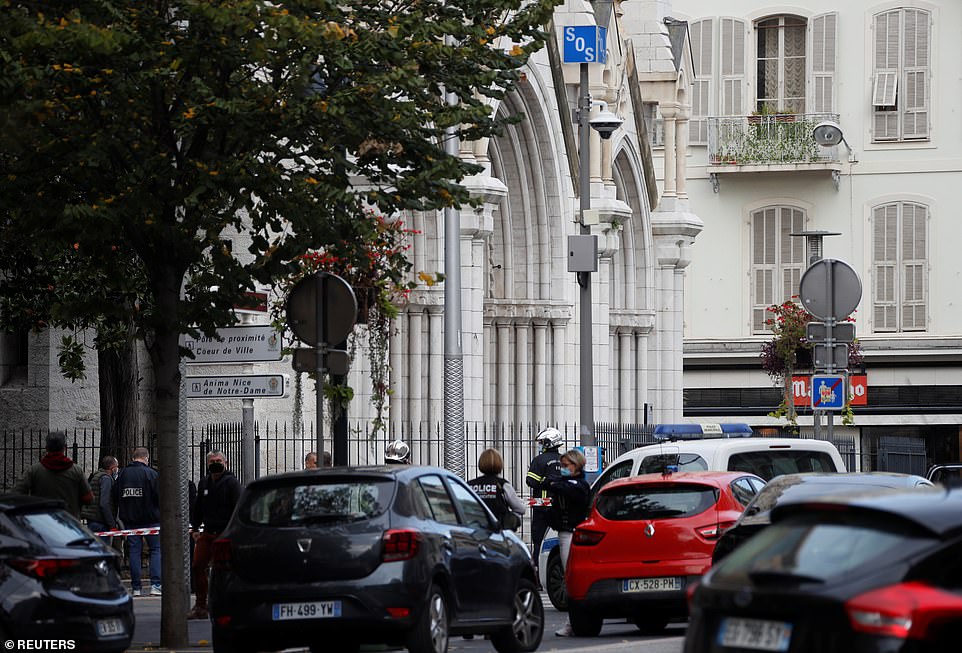 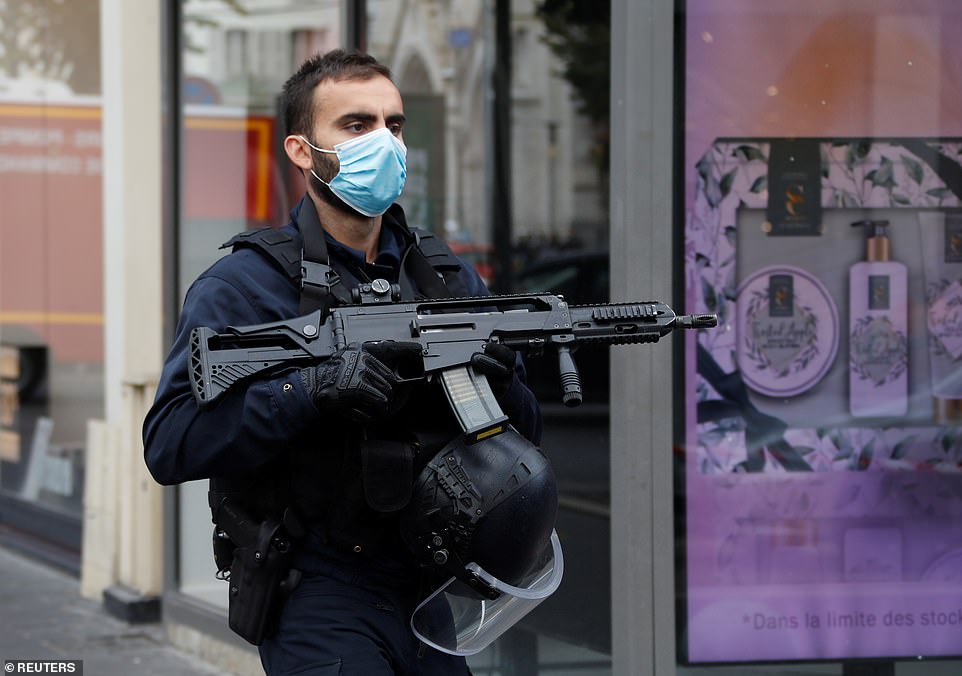 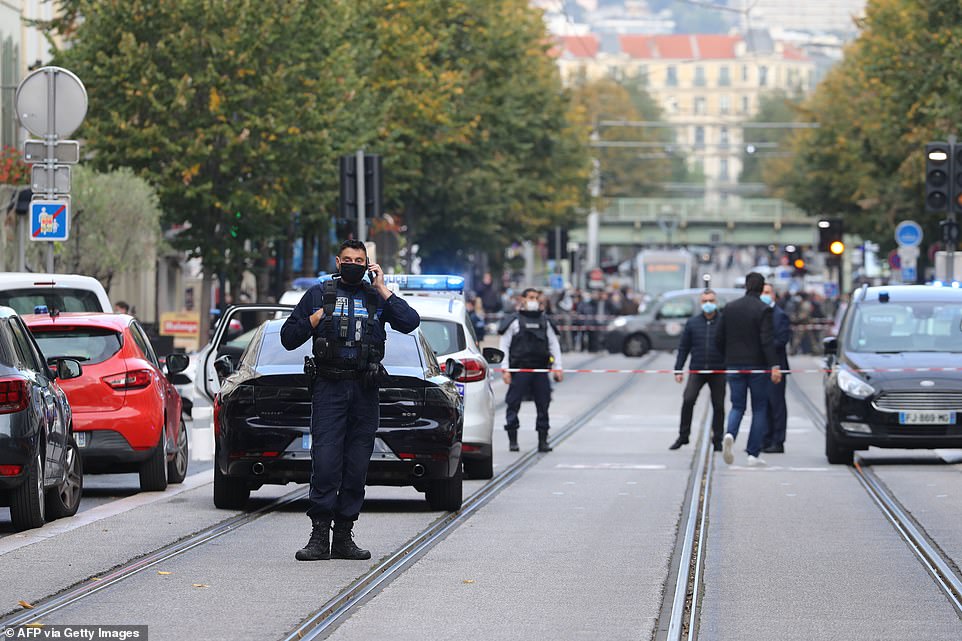 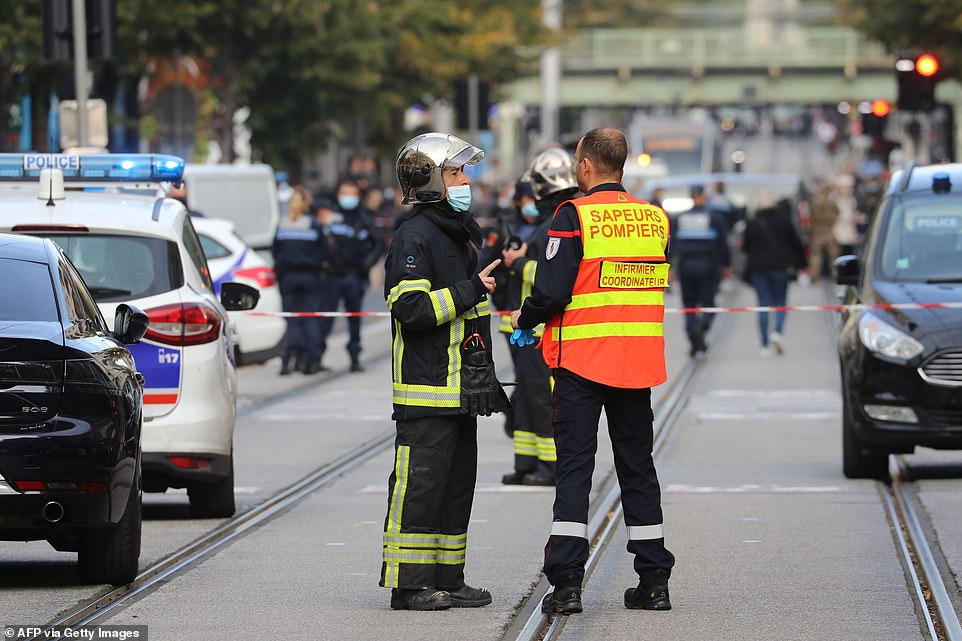 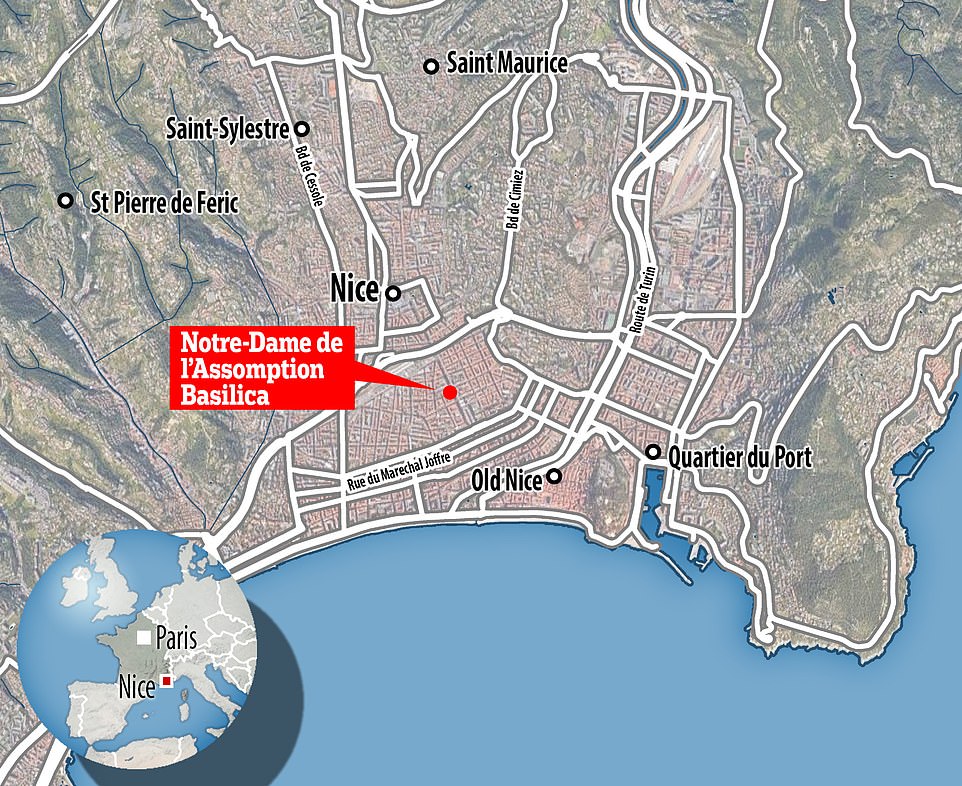 French politicians were taking part in a debate on the country’s new coronavirus restrictions when news of the attack reached them. They observed a minute of silence before the debate broke up so an emergency security meeting could be held.

Gérald Darmanin, the French Interior Minister, confirmed that a crisis meeting had been held alongside Prime Minister Jean Castex.

The attack is just the latest to strike France, after history teacher Samuel Paty was beheaded in another attack north of Paris.

Paty was stabbed by an 18-year-old Chechen after he showed the cartoons to his students during a lesson on free speech.

Parents of pupils at the school had led a campaign against him, before the attack took place. Seven have been arrested.

The man has admitted to police that he was targeting the magazine for publishing cartoons of the Prophet Mohammed. 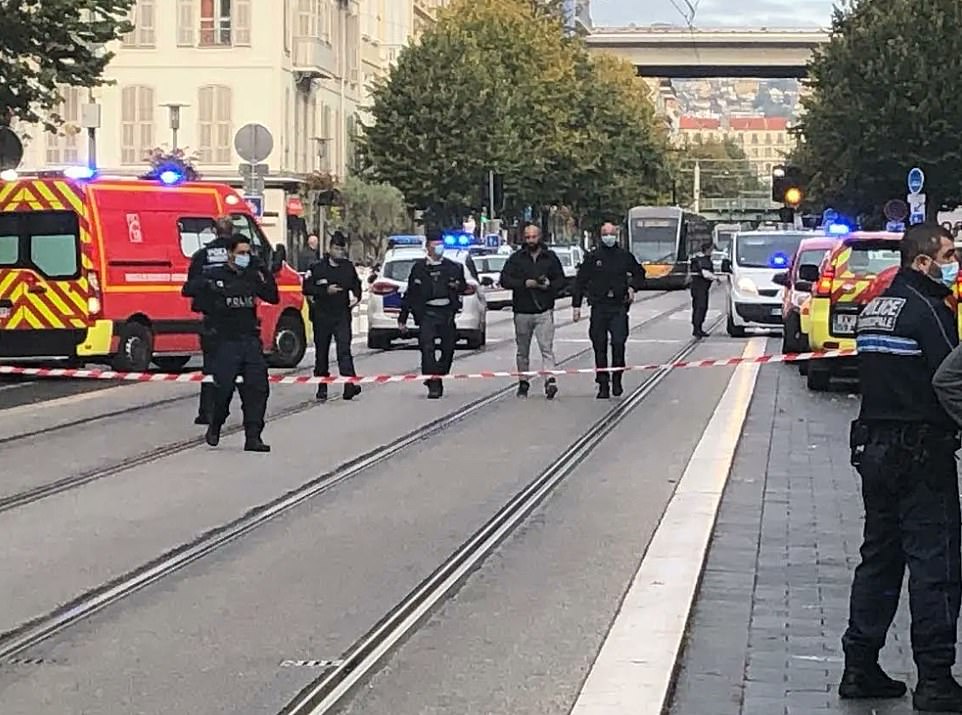 The attack is thought to have begun around 9am before police were called, and arrested the perpetrator. The area is now cordoned off 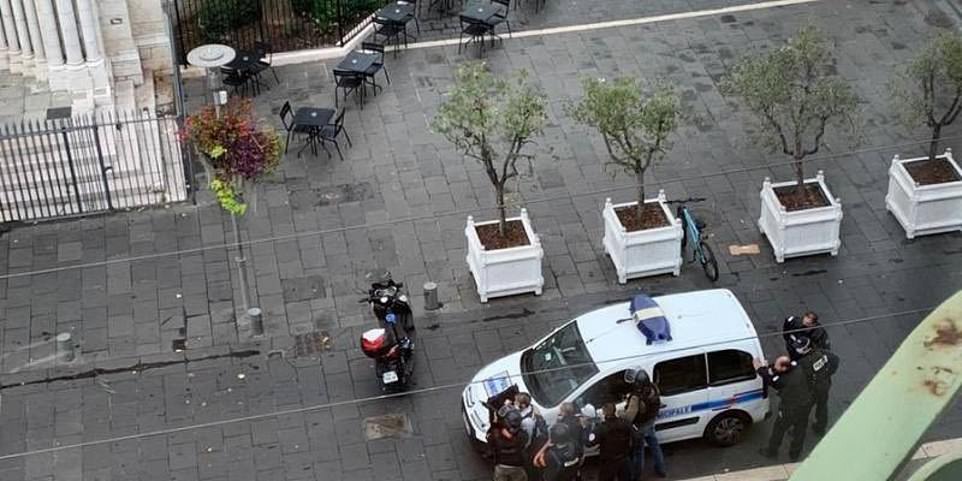 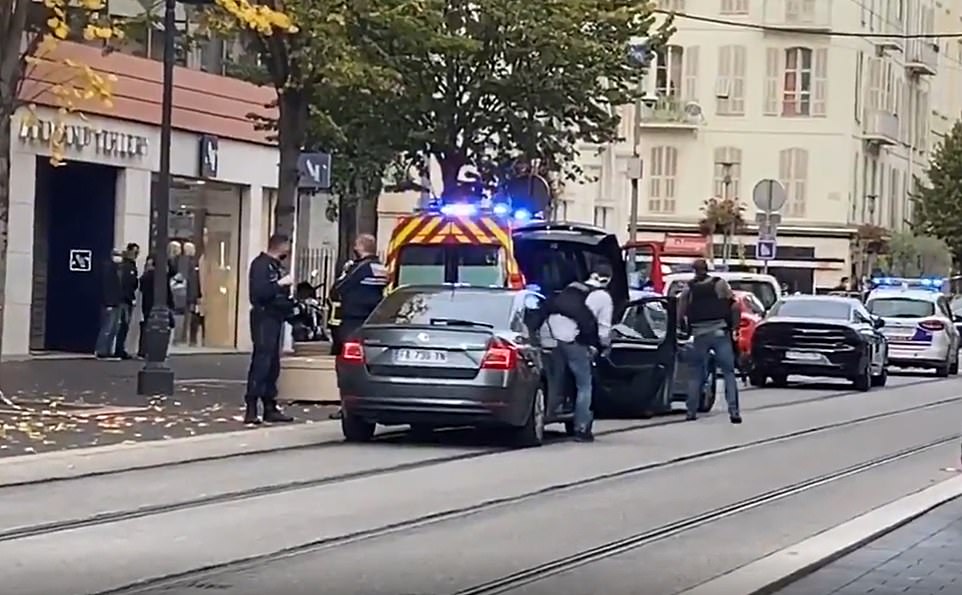 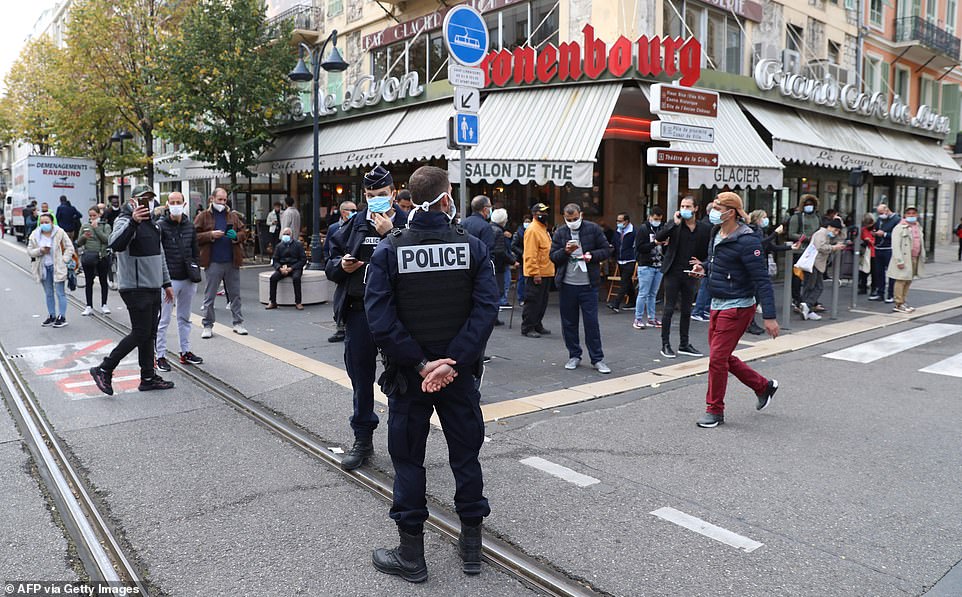 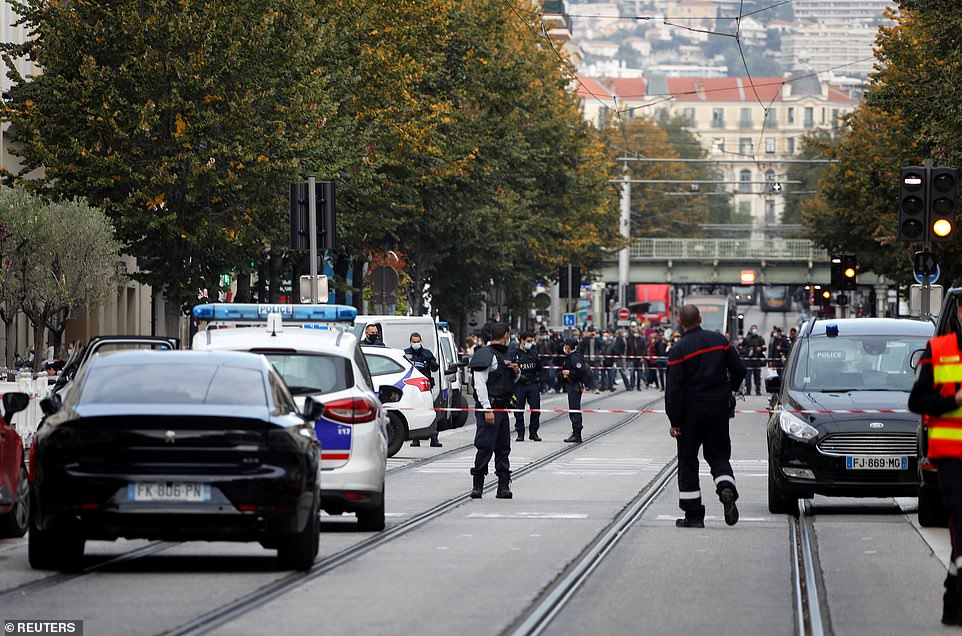 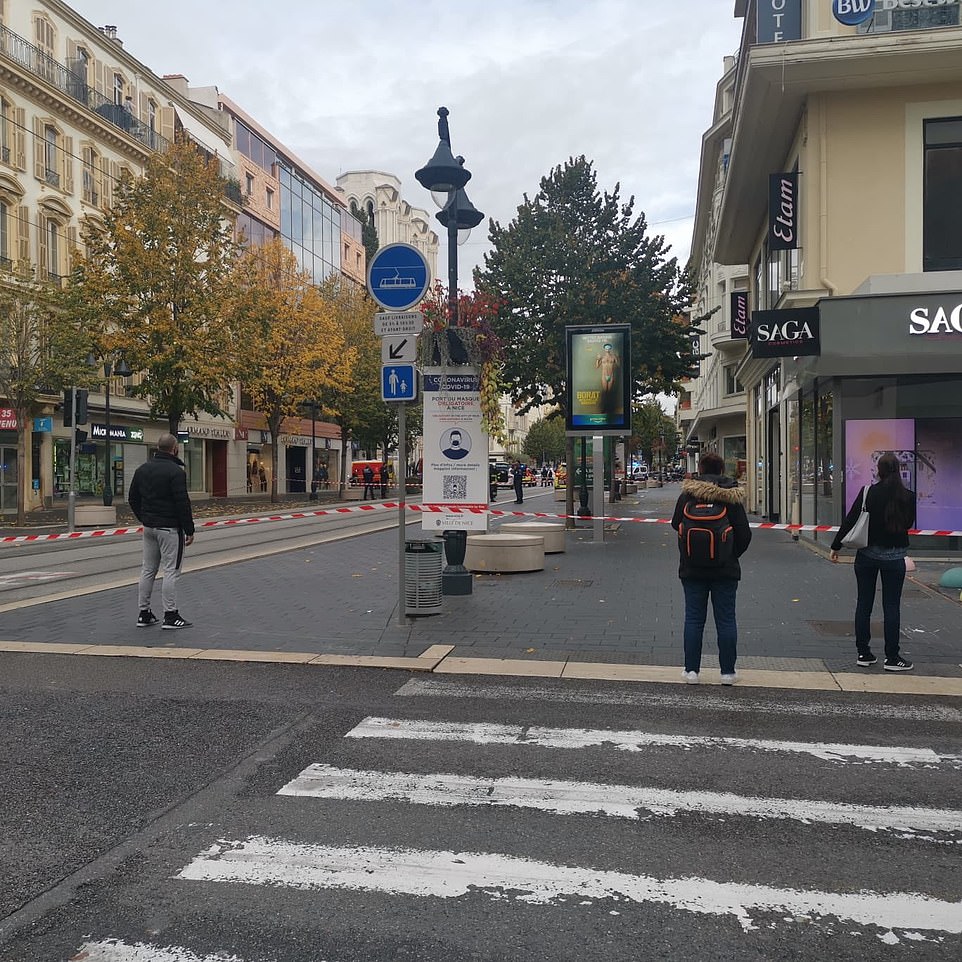 It also comes amid mass protests in many Islamic countries against Emmanuel Macron, after the French President spoke up in defence of the cartoons.

Tweeting in Arabic, he wrote: ‘Nothing makes us hold back, ever. We respect all differences in the spirit of peace. We never accept hate speech and defend rational debate.

‘We will always stand by human dignity and universal values.’

His remarks have prompted demonstrations in Gaza, Turkey, Pakistan and Bangladesh, and boycotts of French products in Jordan, Kuwait, Qatar and Palestinian territories.

Turkish President Recep Tayyip Erdogan has led outrage at Macron, suggesting that he is mentally ill and needs to have his health evaluated.