A young girl was rapt when her mother decided to change the time of her swimming lessons as it meant she no long had to have the teacher who ‘held her between the legs’, a court has heard.

The eight-year-old had girl been receiving lessons from Kyle James Henk Daniels, 22, at the Mosman Swim Centre for several weeks when her mother changed the day to fit in better with their schedule.

News that swimming would now be on a different day made the girl ‘very happy’, her mother told Downing Centre District Court on Thursday.

When the woman asked her daughter why she was happy, the response shocked her.

‘She said: “I didn’t like the way he held me. He held me between my legs and he moved his fingers”,’ the woman told the court.

The girl, one of Daniels’ nine alleged victims, herself gave pre-recorded evidence to the court on Thursday, stroking a soft toy as she answered more than 200 questions during a police interview. 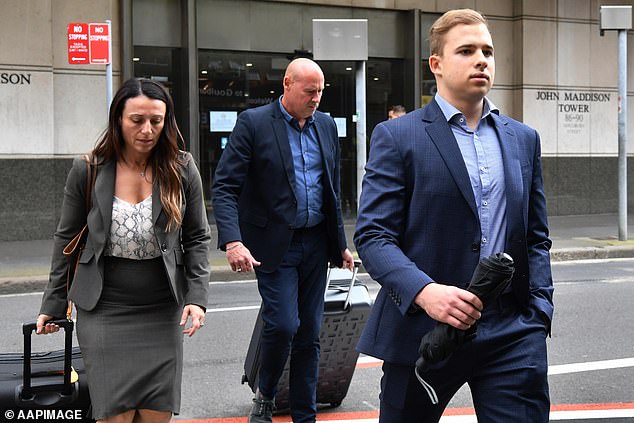 A young girl was rapt when her mother decided to change the time of her swimming lessons as it meant she no long had to be taught by Kyle James Henk Daniels (right), the teacher who she claimed ‘held her between legs’, a court has heard 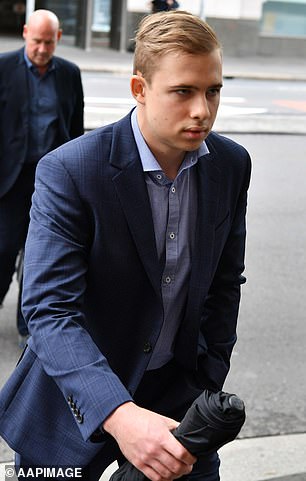 When asked how she felt when Daniels allegedly held her in the pool, the girl said: ‘It felt really uncomfortable. I didn’t like it.’

Daniels has pleaded not guilty to 26 charges over the alleged sexual assault of nine girls, aged between six and 11, at the swim centre between 2018 and March 2019.

When asked by Crown prosecutor Karl Prince what she told her daughter after finding out about her alleged assault, the girl’s mother said: ‘I told her no teacher should ever need to hold her anywhere below her armpits.’

The woman and her husband did discuss taking the allegations to police, but instead decided to alert management at EzySwim Mosman Swim Centre.

After a discussion with staff at the pool, the woman decided she was happy to ‘leave it to them to deal with’.

‘I did talk about [taking it to police] because we believed our daughter,’ she said.

‘[But] we understood that mistakes can happen and we wanted to believe this was a mistake.’

However when an all-parent email arrived from the swim school in March 2018 telling them Daniels had been removed from his role and was under police investigation, the girl’s parents went to police. 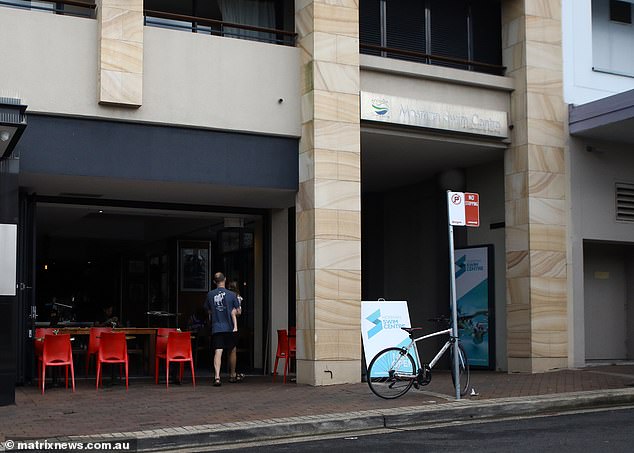 Daniels, 22, is facing a five-week trial over 26 charges relating to the alleged sexual assault of nine girls aged between six and 11 at Mosman Swim Centre (pictured), on Sydney’s lower north shore. He has pleaded not guilty to all counts

The woman was interviewed by a detective from the child sex abuse squad on March 14, 2019.

But she told the court that a day earlier she had discussed the situation with the girl and told her it was important to ‘have her story heard’ and ‘to fight back’.

However details of this conversation were not included in her police statement.

During a tense exchange Daniels’ defence barrister Leslie Nicholls questioned if the woman had given ‘inconsistent’ evidence because she wanted to see Daniels pay.

‘The reason why you added those two extra parts in your evidence that were not in your statement is because you want him to be punished, do you agree?’ the woman was asked by Mr Nicholls.

‘I want the right thing,’ the woman said.

The woman insisted to the court that her statement was true, but that ‘yes’, she had perhaps left out some information on the first occasion.

‘It is an accurate statement, it is perhaps missing some detail,’ she said.

Earlier in the day the court heard that crucial CCTV footage of Daniels teaching some of his alleged victims was never attained by police because the files had become corrupted.

Mr Prince told the court that when police requested the Mosman Swim Centre hand over CCTV footage of Daniels’ lesson with one of the alleged victims, they received only ‘portions’.

‘There are five cameras pointed at the pool and continuously recording. After police became aware of the complaints, a request was sent to the swim centre for all of the CCTV from the 9th of February and 14th of February [2019],’ Mr Prince told the court.

‘When they [police] requested the CCTV all they received was portions from both days.

‘We don’t have CCTV footage of the lessons where the alleged assault occurred.’ 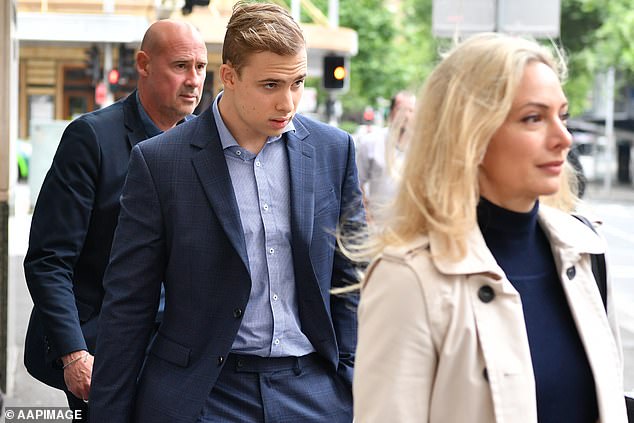 Crown Prosecutor Karl Prince told the court that when police requested the Mosman Swim Centre hand over CCTV footage of Daniels’ lesson with one of the alleged victims, they received only ‘portions’ (Daniels is pictured leaving Downing Centre District Court with his parents James and Janine on Tuesday)

He maintained however that ‘there was nothing accidental or clumsy’ about Daniels’ actions and alleged the young coach had a ‘sexual interest’ in ‘female swim students aged between five and 10.’

Mr Prince told the court that the accounts of all the young girls were quite consistent when it came to what Daniels had allegedly done to them.

‘The allegations are so similar in what they allege against the accused that it makes it more likely that each is telling the truth,’ he said.

‘The Crown case is the accused has a tendency to have a particular state of mind – that state of mind is a sexual interest in female swim school students between five and 10 years old.

‘[And that] he opportunistically engaged in sexual conduct with female swim school students between five and 10 while he is teaching those students and they are under his care and authority.’

Mr Nicholls also gave his opening on Thursday and identified what he called ‘some of the issues’ with the Crown case.

In his opening statement Mr Nicholls said the real dispute of the trial was whether his client “deliberately and unlawfully touched the private areas” of the girls he taught.

‘[He] absolutely and totally denies that he did so,’ Mr Nicholls said.

‘He has never knowingly or intentionally touched any of the complainants in a sexual, indecent or any other unlawful manner whatsoever.

‘And that in a nutshell is his case.’

Mr Nicholls told the jury that one of the young alleged victims was already aware when interviewed by police of CCTV that related to Daniels’ alleged offences.

He claimed that the influence of the police officer in charge of the case and media had impacted their evidence and the overall case against Daniels.

The trial before Judge Kara Shead will continue on Friday morning.