After almost a week of outcry and nationwide
protests over the TRESemmé advert on Clicks’ website, Wits University senior lecturer
Danai Mupotsa is sceptical about the apologies issued by these companies. The
African Literature scholar said she fears they lack the true understanding and
will to change, as their values and culture are built upon the structures of
racial capitalism.

If people have never seen themselves in an image on television or in a book or advertising, you start to feel like you don’t exist.

Mupotsa recalled her own childhood experience,
growing up in Zimbabwe, where the only representation she saw of black hair was
on relaxer boxes. These featured a black child with straight silky hair.

“That was the image that I aspired to, which
was straight hair that was curled in a particular way. Then, when I relaxed my
hair and it didn’t look like that, I was confused.”

The Wits lecturer told News24 that companies such
as Unilever and Clicks often hired people of colour as a form of window
dressing, instead of transforming and changing the centuries-old issues of
systemic racism and inequality.

Mupotsa said it was high time that these big
corporations put their money where their mouths were when it came to the
systematic changes they incorporate.

“If we start to see black women in different
positions of power or occupying strategic positions, rather than just
positions, I think there are two effects to it: a reorientation of the world in
that organisation, because they come with experience of a body that doesn’t
come from a position of power and might bring some insight,” she told
News24.

“Then there’s a transformative possibility.
But oftentimes that form of representation means that you are in that place and
the image is there, but it’s non-performative and non-transformational in that
you have to reproduce the same system because the language is spoken – norms
and values given in that context remain the same.”

Mupotsa lamented the fact that nationwide protests,
such as those staged by the Economic Freedom Fighters (EFF) last week, would
continue to happen because of the long history of racial capitalism.

Companies like Unilever are deeply embedded in the making of global racial capitalism. That system is deeply racialised and gendered. In addition to that, that deep history that is deeply racist has largely remained the same.

“So, Clicks giving us one shelf as ethnic
people… against an entire shelf… that gives you the sense of whose point of
view matters and who owns things,” the current Atlantic Fellow for Racial
Equality said.

EFF supporters protesting at Mall of Africa during the national shutdown of all Clicks outlets in Midrand.

Mupotsa believes that the outrage and conversations
being had around the issues of racism, black hair, representation and the
history of racial science, that have long governed the organisations such as
Unilever, are important for people to feel affirmed. It also helped people to
realise that there was a possibility for a different kind of reality than the
current one.

“If you felt crazy your whole life and then to
realise you’re not crazy…that kind of affirmation is energising and
heartbreaking because you also realise the extent of the problem. These
conversations make it possible for moments of recognition that there are other
ways that we can do business,” she added.

She believes that white people
who expressed their outrage at the protests displayed another kind of cynicism,
as it showed their lack of understanding and affirmed the racist notion that
black people have no value.

“We are too quickly asked to think that things have
changed. Someone says we have decolonised and then we get happy and then are
shocked two years, five years, ten years later when things are still the same.

We need to be deeply cynical because the things we want are beautiful and bigger than we are imagining. Black children should grow up knowing that they are beautiful, without discovering it after burning their hair for 25 years. To reverse the history, it requires deep spiritual, political, ethical, emotional, revolutionary, reforming and radical kind of commitment.

However, Mupotsa also
called out black people who believed the protests were unnecessary and
sabotaged small black-owned companies which sell their products in Clicks.

“I know being
recognised by big corporates gives some kind of access and legitimacy to a
business. But this is where we all need to take some responsibility in how we
mobilise and organise ourselves and imagine a different kind of future,”
she said. 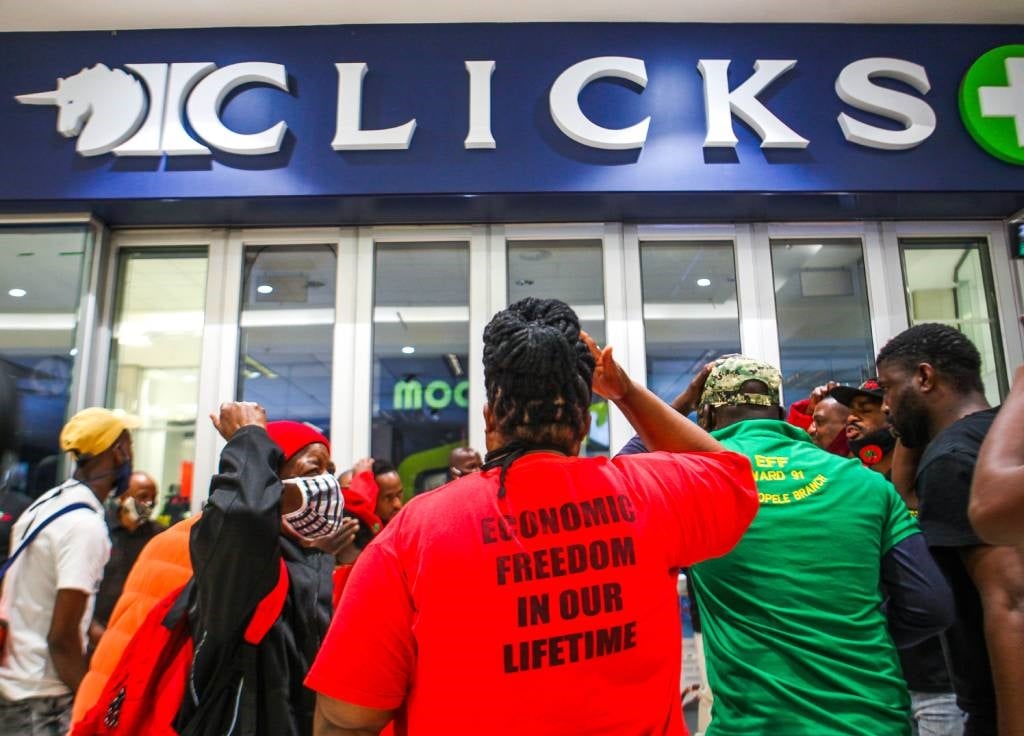 EFF members at Sandton City Mall during the national shutdown of all Clicks outlets.

“If being in
Clicks is the end post, then we are somewhat part of the issue. We deserve
better.”

“The inclusion
model is, for example, that in Clicks you will always be in the ethnic section
because the normative standard is that everybody is white and then you can have
the corner section. Now that is an unjust standard and it doesn’t look like
that in the country or the world,” she said.

Joseph R. Biden Sworn In as 46th US President